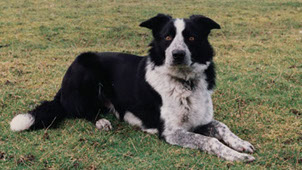 After many years of good work, he moved to Thea, where he spent his last 7 years as a pensioner. The last time he suffered a bit of arthritis in his legs but there was still a twinkle in his eye if he came with me out to the sheep.

The last 3 days he had to be helped to get up to stand, and since I have always had the attitude that dogs should not be kept unnecessarily alive with an unworthy treatment, the decision to give him peace was made today.

I owe Thea many thanks for taking care of him over the years. He will be missed by both of us. 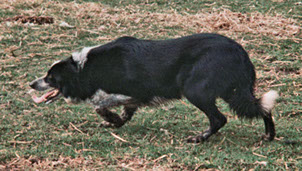 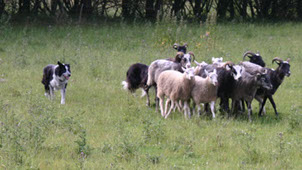 LAD was my first dog and will forever be remembered as something very special. It was with him by my side that I started my shepherd dog career and he has patiently put up with my mistakes and mistakes as a novice shepherd.

He was both clever and strong, and could move both sheep and cattle.

Lad participated from 1995 in class 3 trials, and achieved his best result when he became Nr. 7 at the Continental Championship 1996 at Kongenshus heath.

He was continuously on the Danish European Championship team for 7 years from 1996 to 2002. He achieved a second place at the Danish Championships Sep. 1999 - right after mine (now also died NELL, and the following year he repeated the same placement.