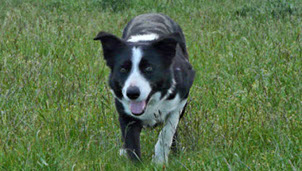 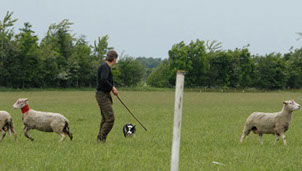 I acquired MEGAN in 2009 from Gabrielle Brinkman in the Netherlands, where I had seen her at the Dutch Open Trials a few years earlier.

I thought there was something exciting about MEGAN and my intuition turned out to be right.

She quickly fell into the pack with my other dogs, but we spent a lot of time getting to know each other properly. this meant i.a. that I had to change one of her commands - simply because I could not get her to work accurately enough.

MEGAN was very cooperative and was incredibly controllable. She was very focused and moved even the most defiant sheep.

She could take an incredible pressure and I don’t think she would give up until she fainted.

I enjoyed working with her. She was an expert in "picking" a sheep with her newborn lambs out of the flock in the field, and was able to drive the sheep through the flock and home.

She achieved many fine competition results - Was thus on the Danish European Championship team in 2011, 2012 and 2013. And she also qualified to start at the World Trials in 2011 in Lowther Park Estate, Penrith, Cumbria

On October 7, 2013, MEGAN gave birth to 4 puppies (Hemp, Spot, Kate and Gwen) - which prevented her from participating in the European Championships in 2014.

From this litter I kept Kate and Spot

Although I had actually retired MEGAN from competitions, I had her with me as a reserve dog for the World Trials 2017 in Hoogwoud, Opmeer, The Netherlands

After the competitions I decided to give MEGAN back to Gabrielle Brinkman who appreciated getting her back and who will give her a good retirement life.

Megan is both clinically and DNA tested free of CEA

MEGAN is a Welsh diminutive (diminutive form) for Margaret, after the Greek 'margaron', "pearl", and therefore means "little pearl".