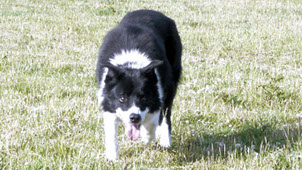 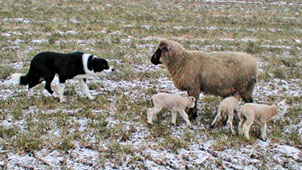 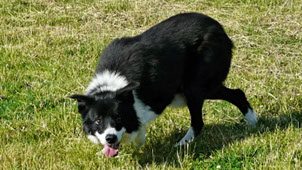 Roy's career finally ended on 14 July 2014, more than 15 years old and after a long shepherd dog life, where he and I together had many good experiences both here in Denmark and around Europe.

If the big trial results were not forthcoming, it was most often due to my mistakes and not his. Often he himself was able to save the situation.

Now he rests here on the farm next to his father LAD and mother NELL.

Roy was for many years my "number 1 dog".

But when, at the age of 12, he slowly began to lose some hearing, he retired as a Trial dog, but still performed ordinary work on the farm.

Roy was my own breeding after my LAD and my NELL - Danish champion 1996 and 1999 (NELL was after Stewart Davidsons 1995 International Surpreme Champion CRAIG).

ROY was a smart and very cooperative dog with the best temperament imaginable. He was always happy and ready to do the work he was put to. But he was also very sensitive. He may not have had the most stylish expression, but was undeniably strong, reliable and efficient.

Over the years he has been a very healthy dog. The visits to the vet were next exclusively to the vaccinations.

In addition to his daily work, he also participated from the time he was just 2 years old in 2000 until 2010 in open competitions - both at home and abroad.

At the Danish Championships in September 2002, he became No. 2. ROY's best result was a semi-final place at the World Sheepdog Trials in 2008 in Wales.

And not to forget, he has since puppy always been with me when I made sheepdog shows:

ROY is the father of Phil (father of Craig) and BESS. and he is the grandfather of Craig, Spot and Kate. In addition, he has descendants in several countries in Europe.

ROY was clinically tested normal for CEA and PRA without remarks.