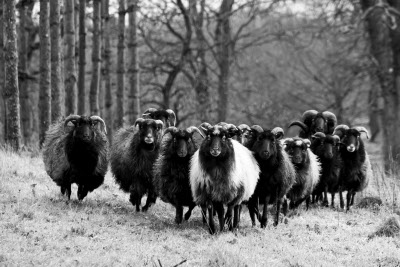 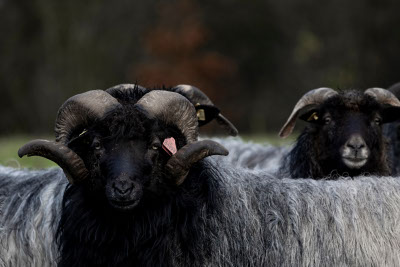 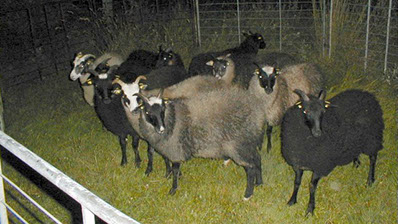 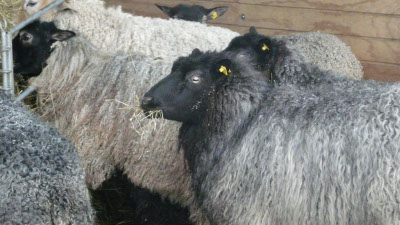 Gotland Pels Sheep - note the white specimen in the back 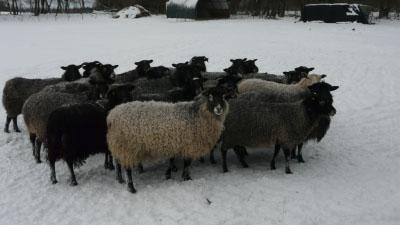 The sheep go out most of the year.

In the barn, they can easily get it too hot

I have kept sheep since 1978, and it was the growing flock of sheep that made it clear that sheepdogs were needed - Border Collies.

The first sheep were of the Shropshire breed, which got a boost for the use of cleaning Christmas tree crops, to which I sold several breeding animals.

Later, several different breeds were crossed into the herd. But in 2004 I bought from the state forest 10 sheep which in Denmark go under the name Lüneburger, and which originally come from Germany and Lüneburger Heide, where they go under the name Graue Gehörnte Heidschnucken - or in everyday speech Schnucken.

However, it soon became clear that these 10 sheep had ancestry from several different other sheep breeds. Which I do not know, but it could be Swedish Gute sheep, as most were motley in the head, but they also bore the imprint of Gotland Pels sheep, which could be seen on the fur which had a tendency to curl.

Although I do not breed in the pedigree, I have for several years used imported pedigree rams from Germany.

My goal has been to get back to it original German landscape type, which will say robustness and frugality as well as the gray color with the black bib and beautiful horn, which it has now also succeeded, and

I now has one of the very few herds in Denmark with original Schnucken.

Slaughter and sale of lamb takes place almost exclusively in the late autumn, because Schnucken only comes into heat once a year in the autumn, which means that the sheep give birth to the lambs in the spring. The lambs are slaughtered around 6 to 8 months old, for comparison, a fattening lamb is ready for slaughter after 3 to 4 months.

The lamb meat is a delicacy, it is darker than usual lamb, but is very tender and lean, as it is produced exclusively by natural year-round grazing without the addition of concentrates.

The breeding with the two breeds is now held separated. Both breeds are robust breeds that manage staying out practically spoken all year round. They are both healthy in body structures and  can therefore stand the training with the sheepdogs

Occasionally I sell breeding animals (ewes, lambs and breeding rams). My sheep know both lattice fences and electric net fences and know how to be worked with the border collies.